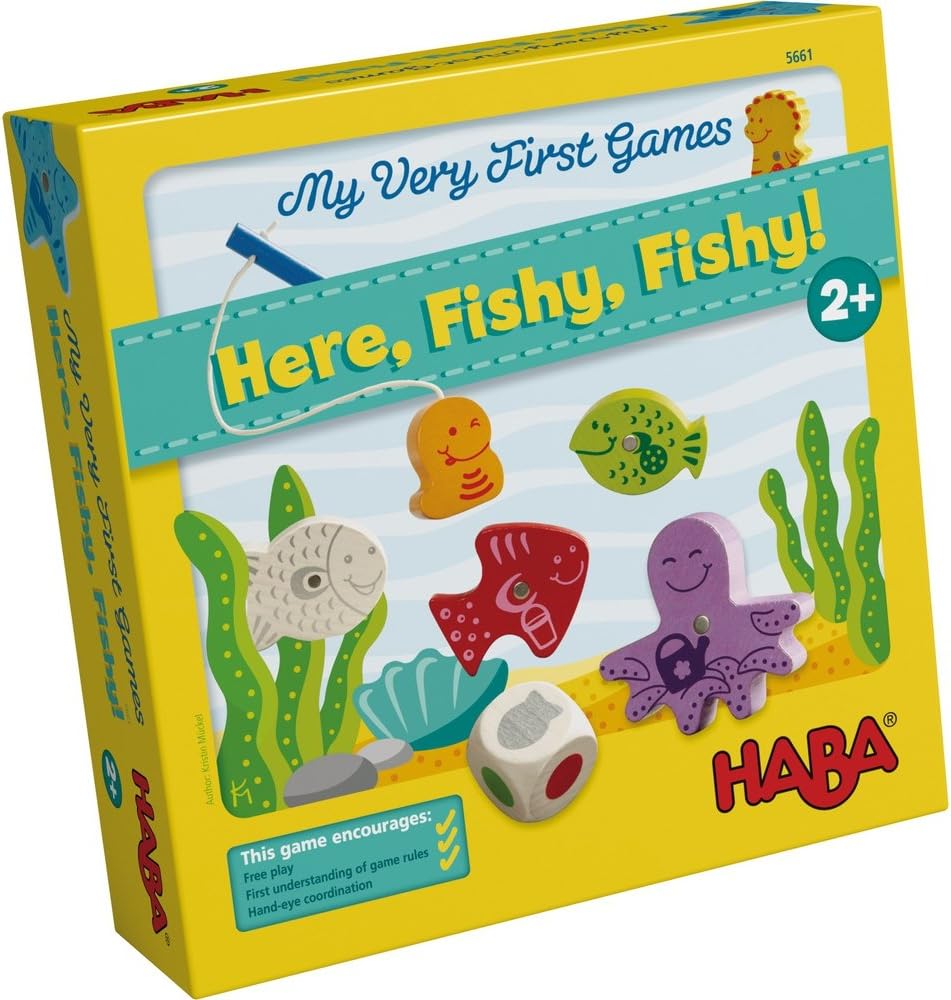 In free play children experiment with the fishing rod, the sea and all the sea dwellers, bringing them to life in the most imaginative way. The game with rules acquaints children with first game rules and how to apply them. The playful description of the game instructions carries the child into the realm of role-play and helps him to understand and apply the instructions better. Fishing with the rod fosters hand-eye coordination in particular and strengthens concentration skills.

Play with your child! Talk with him about sea life and the different colorful animals in the sea thereby enhancing your child’s language, auditory and creative skills!

The funny sea inhabitants swim happily in all directions and discover many exciting things to play with. Having rolled the die, the children’s task is to fish for a sea dweller of the color shown on the die. If successful, the children receive a toy for the sea dweller caught and can puzzle it into their collecting board. Who is the best angler and will be the first to collect five toys?

Preparation of the Game

The bottom part of the box is the sea where the fishing takes place. Place the box bottom in the center of the table and place the six sea dwellers face up in the box. Each child takes a collecting board, then carefully pops out the cardboard pieces (toys) and places them next to the board. Get the die and the rod ready to use.

Which one of you most likes eating fish? You may start. Take the die and roll it

My Very First Games Here Fishy Fishy. We dare you to play it just once!

Toddlers and preschool kids will not sit and play a game for hours on end. Here, Fishy, Fishy is a fun game that doesn’t take too long. The children are learning about colors, taking turns and encouraging each other on. They are working on dexterity skills and matching. Fishy Fishy offers a couple additional game variations and makes a great option for free play. The perfect addition to any household!

What is so special about My Very First Games Series for Ages 2+?

These HABA games are developed by educators and game authors, especially for small children.

Initially, small children start to explore the material in free play becoming familiar with the different possibilities. Only then does playing according to rules come into play. Small children, of course, are not yet experienced with board games. My Very First Games stimulate children over and over again by setting appropriate challenges for their age, fostering their early development, holding their interest for a long time ... and, above all, being a lot of fun.

DermaChange Platinum Hair Growth Conditioner - With Vitamins - T: It's funny how people do say that the most dangerous place to be is the Middle of the road. Most of the a...